Frances Fowler undertook a study of Overstrand Hall in 1990 as a thesis for the Department of Art History at the Univeristy of Fife. Her full work can be read at Cromer Museum. She comments, "It is apparent, when looking at Overstrand Hall, that it is a house produced by an artchitect still experimenting with ideas concerning style, construction, materials and organisation, but it shows Lutyens gaining confidence and a greater simplicity which had been absent form most of his designs up to this point".

Edwin Lutyens, later Sir Edwin Lutyens, would go on to be a leading architect of his age. He was commissioned to build Overstrand Hall as a summer residence for Lord and Lady Hillingdon during that building boom which came to Overstrand in the 1890s. He'd already developed the Pleasaunce for Lord and Lady Battersea and would design more buildings in the village, as well as influence others in their work. The Pleasaunce made no concession to local materials and style but Overstrand Hall would be different in its use of flint. 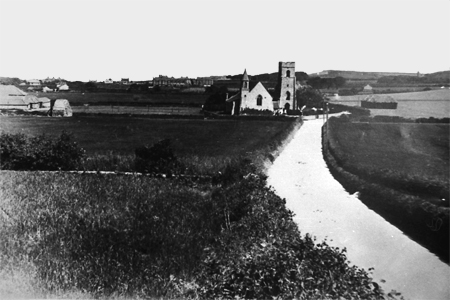 The buildings on the left of this picture are the buildings that stood on the site before the current Overstrand Hall was built. On the right is Christchurch and St Martins before it was rebuilt.

There had been a previous farm building on the site; the Ordnance Survey map surveyed in 1885 calls it Overstrand Hall. Earlier in the century the Tithe Map of 1838 had simply referred to it as 'house and yard' in the ownership of Richard Gurney and described the land use as 'yard and garden'. For further discussion of the history see Overstrand Hall on the village website.

The Hall is currently used as an Educational Activity Centre by Kingswood, providing experiences outside the classroom for school; in the school holidays it operates as a summer camp. Prior to this use, it was the Leicester and County Convalsecent Home; many residents from the Leicester area recall their stays there after hospital treatment in Leicester.

Our thanks to the Manager of the Kingswood Centre for the opportunity to take the photos of the building in 2009 and to Ralph West who took the photos.

To control the pictures yourself, click on the picture to move on one picture, shift-click for the previous picture and control-click to turn the animation on or off.